The Fireworks of Love
Haley—along with both her family and Daniel’s—had been anticipating the engagement for almost a month. Daniel wanted it to be a complete surprise. On June 5, 2016, he invited her to an Arkansas Travelers game with a few friends. He knew there would be a fireworks display at the end of the game and timed his proposal to coincide. He also knew Haley wouldn’t suspect anything since the plans were made at the last minute. He popped the question during the display, and she said, “yes.” The announcer even caught the moment and gave a shout out to the newly engaged couple.

Favorite Florals
Haley notes Anna Rogers of Magnolia Belle captured the intimate feel of the day through the floral design while balancing it with a natural look. “There were roses to keep it romantic, but also lots of greenery and neutral hues to speak to the rustic feel I wanted as well,” Haley says. “The flowers were one thing that I really wanted to go all out on since I love them so much,” she adds.

The Outdoorsy Hype
Haley opted for a fun and trendsetting “naked” (or un-iced) cake, which she felt had a more rustic feel than traditional fondant-covered or iced versions. 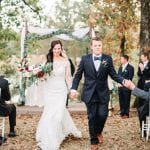 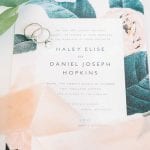 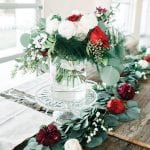 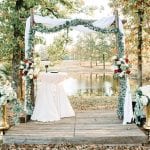 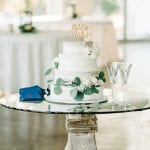 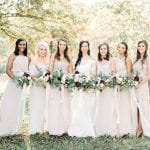 Clasping Hands
On her wedding day, Haley requested that the photographer take a picture of her, her mom’s, and her grandmother’s hands together to show their wedding bands. “I’m very happy I did this because my grandmother recently passed away, and now I have that picture that I will cherish forever,” Haley says.

Pizza Party
Haley & Daniel treated their guests to pizza and salad at the reception. Haley notes that it was a huge hit with the guests and also reflective of the couple since pizza is their favorite food.

Haley’s Advice for Brides-to-Be
“Many people may try to tell you that you can’t put together an awesome wedding in a short time and get all the things you want or have to have. We did it in five months, and it was perfect! It’s also important to take time during the wedding planning process to slow down and love your guy. This will help both parties remember why you’re getting married in the first place and really stop to see what’s important.”