The Laws of Love
Danielle and William met on the second day of orientation at Vanderbilt Law School. “I sat down at his table with some friends on our lunch break, and the rest is history,” Danielle says.

Crescent City Proposal
The couple were spending a weekend in New Orleans. On Sunday morning, William took Danielle to iconic Jackson Square where he got down on one knee to ask for her hand. Danielle—who was completely surprised—recalls tourists in the square taking photos for them of the special moment. “We spent the rest of the day celebrating in a city that certainly knows how,” Danielle says.

Capital Charm
Danielle is from Fort Smith, and the couple had been to Little Rock’s Capital Hotel on several occasions. They fell in love with the downtown icon’s Southern allure and knew it would be the perfect venue for an Arkansas wedding.

Field-Worthy Flair
The arrangements and boutonnieres included cotton as a nod to the Southern elements that flowed throughout the wedding.

Custom Cakes
HIS: William’s cake, which was in the shape of a pyramid complete with a Bass Pro Shop sign, paid homage to his hometown of Memphis. Carrot cake was his flavor of choice.
HERS: Danielle’s cake spoke to her childhood love of Disney and fairytales by having a glass slipper as its topper. It consisted of alternating layers of almond and strawberry. 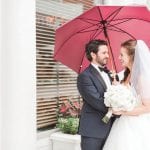 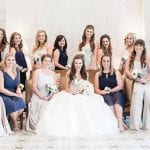 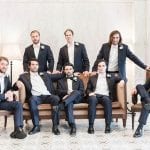 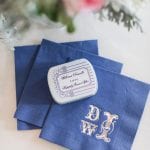 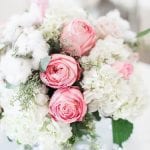 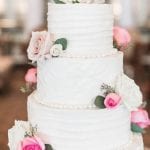 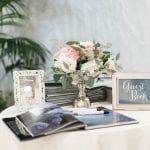 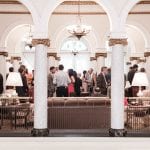 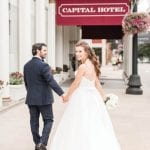 Southern Fare
“Food is a big part of our life,” Danielle says. “We love to cook and our travels tend to center around restaurants, so we wanted our guests to experience delicious, Southern food. For us, that meant the Capital’s famous pimento cheese along with shrimp and Arkansas grits.” Guests also enjoyed barbecue sliders, gazpacho shots, and a carving station. During the cocktail hour, appetizers of smoked duck, tuna tartare cones, and fried macaroni and cheese were also served.

Say “Om”
The bride chose to start her wedding day with a workout with friends. She invited Kayce Johnson of Arkansas Yoga Collective to the hotel for a private yoga class with her bridal party. “It was such a great experience that I would highly recommend to anyone,” she says.